We have available puppies! For more info please contact us on: frenchbulldog@totegnac.com! 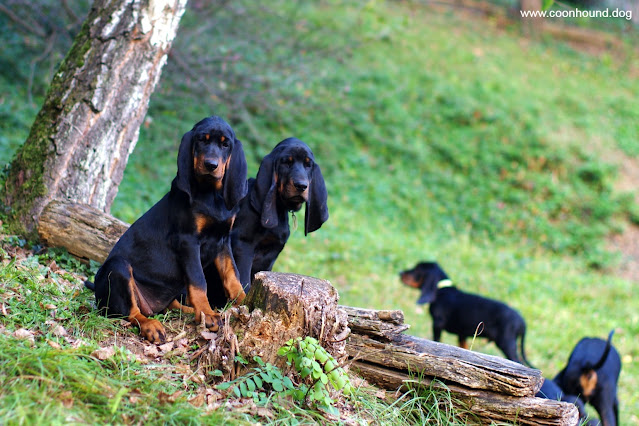 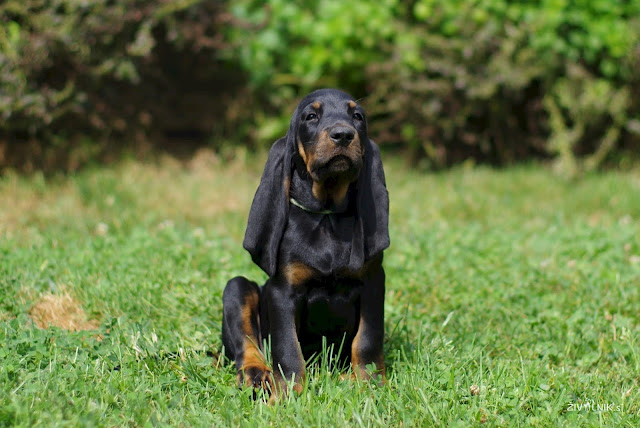 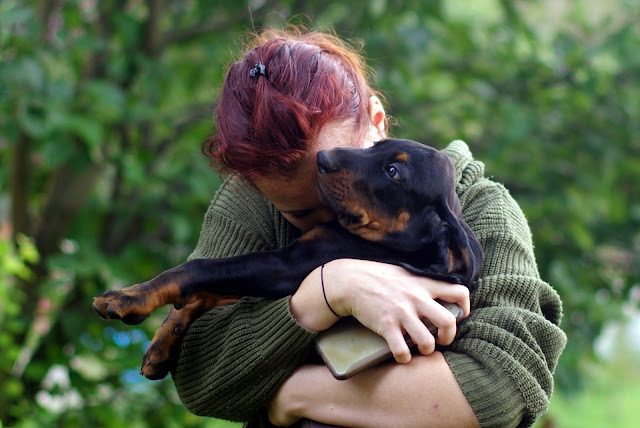 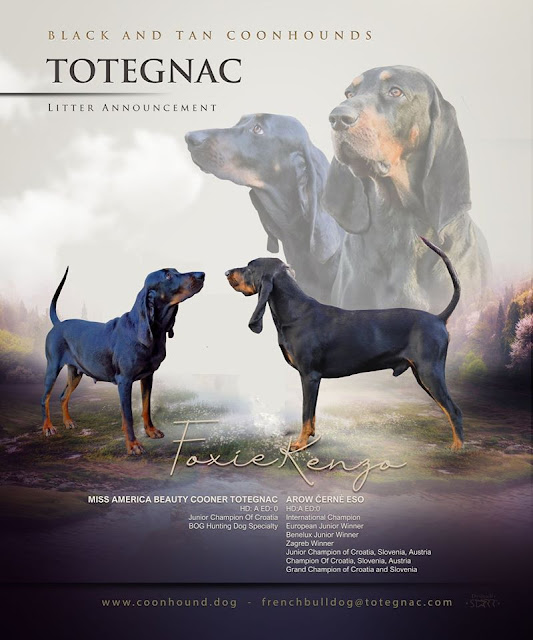 Posted by Totegnac at 13:18 No comments: 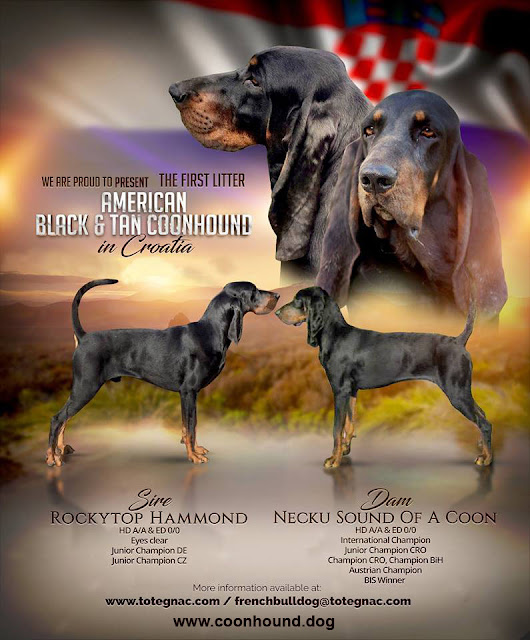 I wish my dad knew... (for the first ever Coonhounds to be born in Croatia). He'd be dancing a jig! He wanted so much to see these dogs go across the ocean... Remember that was well before the internet... Thank you all!!!

Barbara Cosner Little, daughter of William Cosner, the "Master Breeder" of the longer eared Black and Tans. He whelped his first litter in 1921. He along with other breeders namely Don Stringer (Ten Oaks) & Orville Dunham (Grand Mere), became the impetus for AKC acceptance and were the breeders responsible for authoring the first American Kennel Club (AKC) standard for the breed. 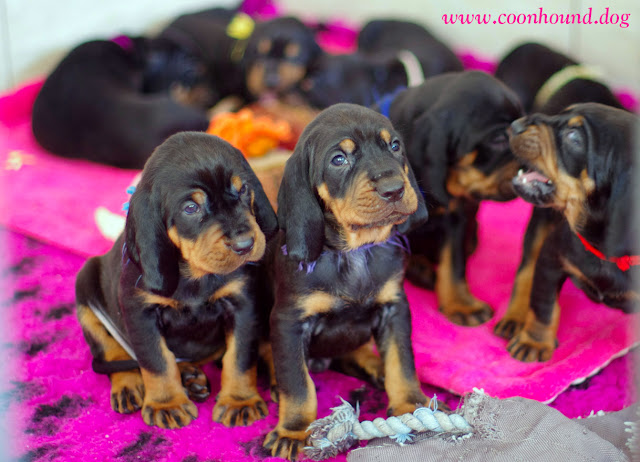 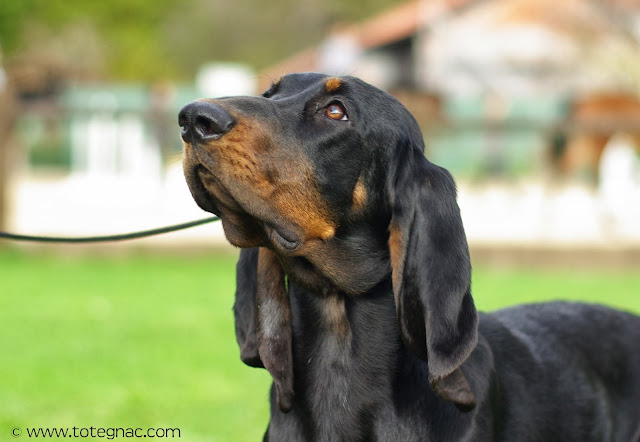 American Black and Tan Coonhound is a rare breed outside of USA. The breed was recognized by the American Kennel Club and Fédération Cynologique Internationale in 1945 and today is the most popular of all coonhounds in America. In Europe there are only few kennels that import high quality dogs from USA.

--- Born in the USA, the outgoing and friendly black and tan coonhound is a versatile companion who shines in the show ring and field. At home, he’s a superb playmate, jogging or walking companion, and bed warmer. One of America's canine aristocrats, the Black and Tan Coonhound's bloodlines hark back to the Talbot hound, yet he's completely a creation of the mountain people of the Ozarks and the Smokies.


FAMOUS FOR HIS COLD NOSE

--- Nose to the ground, he singlemindedly trails his prey, primarily the raccoon but also mountain lions, bears, deer, and other game, "barking up" when his quarry is treed. Of the six coonhound breeds, the Black and Tan is the one most frequently recognized, notable for his size and distinctive coloring. Among hunters, he's famous for his cold nose; that is, the ability to pick up and follow an old trail, no matter how faint.

--- Because of his strong hunting instinct and specialized skills, the Black and Tan Coonhound is rarely thought of as a family dog. Still, for people who admire the hound's independent nature and sense of humor, he can make an excellent companion and at home he tends to be laidback, playful, and gentle.

EXPECT HIM TO SACK OUT ON THE SOFA

--- The stamina that makes this Hound a great hunting dog also makes him an excellent jogging or running companion. But he's equally satisfied with a good daily walk, especially if there's plenty of sniffing time built in. Afterward, expect him to sack out on the sofa, preferably in or near your lap. This is a dog who likes his comforts.

--- Black and Tan Coonhounds are fond of children and willing playmates. They get along well with other dogs and can even be buddies with cats if properly introduced. They possess good watchdog skills, and are likely to sound off with a deep-throated bark to alert you that someone's approaching. This dog is big enough to look intimidating, but unlikely to bite or otherwise harm anyone.

THESE DOGS CAN SING

--- No, you're not getting the Mormon Tabernacle Choir here but the deep bay of a hound who's treed a squirrel, cat, or other furry animal foolish enough to enter your yard. Lots of people love the music of the hounds, but those people might not include your neighbors.

--- He's not for the faint of heart. A Coonhound needs a leader who's as stubborn and smart as he is. Still, if you can have a sense of humor and can accept his drawbacks, plus provide the Black and Tan with the human companionship he loves, moderate daily exercise, and firm, consistent, patient training, it's hard not to fall in love with this breed. (source: dogtime.com) 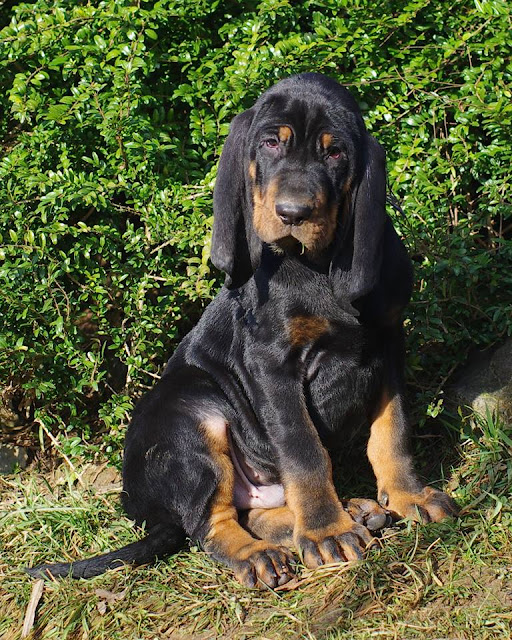 As I was walking around looking at the dogs, I noticed two Coonhound males that were eyeing each other from inside their crates. They decided they did not like each other and both of them sat on their haunches, threw back their heads as best they could and let out a long drawn out bay. ...AND THE WALLS SHOOK. All the collies and all the cockers fell silent as if they knew they had been outclassed. I said to myself, "I HAVE to have one of these dogs!" The American Black and Tan Coonhound Club's motto for the breed is "Beauty Strength Courage". This pretty much says it all. This breed is wonderful for families. My coonhounds raised my children.

--- Edith S. Atchley of Rockytop Black and Tans
Posted by Planet FB at 11:20 No comments: 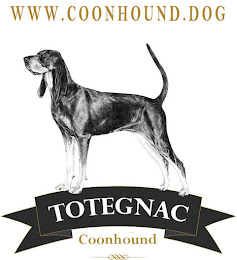 Our first litter of Black and Tan Coonhounds was born on November 23. 2017. Six males & three females. The mother of that litter is our Ulina (Necku Sound Of A Coon, born in Finland), and dad is male from Czech Republic, born in Alabama. His name is Rockytop Hammond.

Kennel Totegnac is registered at Fédération Cynologique Internationale, we are members of Croatian Kennel Club and Toy Dog Club Zagreb. We are situated 25 kilometers west from Zagreb, capital city of Croatia. More about our french bulldogs at www.totegnac.com